TORONTO — Regardless of a team’s goals or expectations, there is nothing routine or informal about winning a conference championship. It is always a big deal, not the biggest, but there are only a few trophy presentations per year and this was one of them.

This is not lost on the Cleveland Cavaliers or their fans. It took them 37 years to make the Finals for the first time in 2007 and now, thanks to LeBron James, they’re going to get a third chance at a title in the past 10 years after their stars flexed their muscles in a 113-87 Game 6 victory to close out the Toronto Raptors and the Eastern Conference finals.

The Cavs will now wait to see if they host the Oklahoma City Thunder in Game 1 of the NBA Finals next Thursday or start a rematch at the Golden State Warriors.

Coach Tyronn Lue said he wanted to make it feel like a Game 7 because the Cavs were 0-4 in Air Canada Centre this season and 0-2 in this series. He coached that way, riding his stars hard, including James, who only rested 74 seconds over the first three quarters.

But the all-out mentality paid off. The Cavs led essentially from start to finish, ramping up their wide-ranging offensive attack. James was clearly in an all-business mindset, with Kyrie Irving as the facilitator, as he had five assists and James had 14 points in the first quarter to set the tone.

James was vicious in his basket attacks throughout the game, and his interior action freed up the team’s variety of outside shooters. The Cavs bombed in 17 3-pointers, a formula that has fueled their offense to huge nights throughout the postseason. 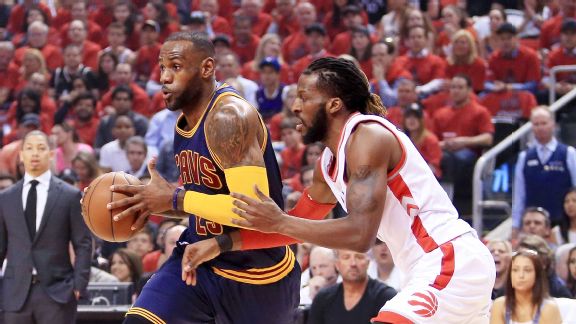 LeBron James and the Cavs eliminated the Raptors, lifting Cleveland into the NBA Finals.

James ended with 33 points, his highest scoring game of the postseason, as he clearly was interested in depressing the gas pedal as he added 11 rebounds. Irving was strong as well, having one of his peak performances where he was as effective on drives as he was on jumpers as he cruised to 30 points. Kevin Love had a second consecutive strong game, ending the slump he’d had in Toronto, finishing with 20 points and 12 rebounds.

The Cavs are 8-0 this season and 6-0 in the playoffs when their three stars all score more than 20 points, as was the case in Games 5 and 6.

Two remarkable streaks continued for James, both historic. He became the first player since the days of the Bill Russell-led Boston Celtics of the 1960s to make six consecutive Finals, as did former Miami Heat teammate James Jones.

He also made it 25 consecutive series where he’s won at least one road game in a playoff series. The Cavs are now 5-0 in road closeout games over the past two seasons, including 3-0 this postseason.

Mon May 30 , 2016
www.cadillac.com Versatility, reinvented. The XT5 crossover was crafted to help you outsmart whatever task you have at hand. Its generously sized interior is filled with advanced features to help keep you safe and connected, while the chiseled exterior lines make a striking statement. A thoroughly progressive vehicle both inside and […]

TV HOW WE SEE US!

The Multiethnic Advocates for Cultural Competence (MACC) is a statewide organization committed to transforming systems through the implementation and sustainment of concepts related to cultural competence. We are a clearinghouse for training, resources, research, best practices, and collaboration.

And So On And So On